Oleg Okhapkin’s biographers never fail to mention his religious family and the influence that his grandmother’s friend Evdokia Ivanovna Gorshkova, who was a Joanite and was somehow reminiscent of Pushkin’s nanny Arina Rodionovna, had on the future poet. Nor do they overlook his singing in the choir of the Alexander Nevsky Lavra and watching the monastic activities. Much later, this would lead to troubles arising from the poet’s close association with the Orthodox underground and to the threat of imminent arrest. Finally, there is the poet’s close acquaintance with psychiatry. This usually suffices to paint the picture of an Orthodox martyr scorched in the infernal smelting plant of the Soviet regime — a holy fool whose life was spent in poetry, prayer and hospital wards. With the inevitable conclusion that Okhapkin was an atypical, but very picturesque example of an ‘internal emigrant’, seeking escape from the Soviet reality in the bosom of the Russian Orthodox tradition.
The reason this biography sounds convincing is because it is true. Yet for his friends and readers Oleg Okhapkin was first and foremost a poet. And one of the best of his time. Standing apart from his professional brethren, he belonged neither with Akhmatova’s Orphans, nor in Henri Volokhonsky, Vladimir Erl or Victor Krivulin’s groups. He always went his own way. People like to mention his friendship with Joseph Brodsky – ‘a friendship beneath the Smolny Cathedral dome’ – and even like to call Okhapkin Brodsky’s pupil. The matter was that Okhapkin had done quite a lot of jobs in his life, starting with a stoker, a handyman at the Hermitage and an assistant geologist and archeologist, including among them the erecting of the scaffolding in Smolny Cathedral. It was there that Brodsky had visited him, heard his poems and dropped the following comment: ‘You’ll get the Nobel prize in 20 years from now.’ Oleg had told me the story long before Brodsky became a Nobel Prize winner.
And yet these testimonies explain but little. Both poets had many other friends in Leningrad. Brodsky’s poetry is stylistically different from Okhapkin’s. Brodsky was much less enthusiastic about the tradition of Derzhavin’s and Lomonosov’s odes. The language of his poems bears little resemblance to Okhapkin’s lyrical and naïve naturalism. The connection between the two poets clearly has a more profound character: it’s not about similarity, it is about kinship.
The nature of their kinship was that both Oleg Okhapkin and Joseph Brodsky masterfully combined modernity with tradition. Okhapkin, just like Brodsky, is an archaist and innovator in one. This is the direction that is really worth exploring.
Let’s take their attitude to syllabic poetry. Okhapkin appeared to be one of the few who wanted to revive the Russian syllabic poetry tradition, mostly connected with the name of Simeon Polotsky. Some believe that it was Okhapkin who got Brodsky interested in syllabics (incidentally promoting him to write To Verse and Imitation of Kantemirov’s Satires). This is just one example of the revival of the archaic tradition.
On the other hand, Okhapkin clearly followed the style of Derzhavin and Tyutchev. He was the first to receive the Derzhavin prize in 1995 ‘for development of the Russian ode’. It is as if Okhapkin were the direct descendant of the Golden age of Russian poetry, who had somehow eluded the influence of the Silver and Bronze Ages. That seems to contradict Tynyaov’s hypothesis that the tradition of poetry passes from the first generation to the third. Since the traditional element in Okhapkin’ poetry is stronger than the average, his heritage proves that there are exceptions.
Finally, Okhapkin also actively explored religious themes. Here’s the unexpected end of his beautiful interpretation of the gospel parable of the prodigal son:
………
Отец же о прошлом ни слова.
Тихонько с колен его поднял
И весело кличет слугу.
Душа его к пиру готова.
Он видит, что сын его понял,
И вот он пред сыном в долгу.

What is meant by the strange sigh heard behind the father’s back after he gives his warnings to the older son? The biblical story is followed by a dramatic breakdown, psychological investigation of the mystery of the soul and, being a ballad, by romanticizing. This kind of synthesis is quite typical for Okhapkin.
In addition to biblical themes, the poet was also interested in the city of St. Petersburg and a kind of late Byzantine aristocracy. On the other hand, he often used modern metaphors and kept in touch with Akhmatova, Pasternak and Mandelstam as well as displaying the tendency to use Baroque-style ‘combinations of distant ideas’ in his work. There was also his decidedly naive form of realism and a kind of Mitki-style openness and spontaneity that promoted Okhapkin’s ascent to the understanding of the almost musical vibrations of the sunset and the sad charm of things on the background of the budding spring or autumn leaves.
Together, all these qualities create a kind of fusion of archaism and Avant guard. This is what unites Okhapkin with the author of Lengthy Elegy to John Donn.
Tradition? Yes. But closely connected with subjectivity and novelty. Taut like a string that rings but does not break. Not canned and dry, but released into the vastness of time. This is not about overcoming, it is about updating the tradition. This is tradition as a method, not as a preservative agent.
This is the topic that should be expanded on. There are many people who wonder at the uncertain and blurred criteria that are commonly used in the disputes of archaists and innovators, especially in Russia. Musing about the textbook conflict between Karamzin and Shishkov, it is worth asking the question why the former is considered an innovator, and the latter – an out and out conservative? After all it was none other than Karamzin who decided to replace the style of Lomonosov with the ‘literary acceptable’ mixture of French with the regional Russian dialect of Nizhny Novgorod. This led to exchanging Slavic idioms for loan translations from French, which is rather difficult to call creativeness in the full sense of the word as the novelty here is quite conditional.
Shishkov, on the other hand, appears by the standards of the twentieth century to be almost avant-garde with his idea to coin new words using Russian phonemes, of which a textbook example would be the famous ‘water-splashers’ to be used instead of the French ‘galoshes’. Especially if his idea is compared to Karamzin’s followers writing of ‘motley crowds of rural Oreades rendezvous-ing with dark Pharaonides’ meaning ‘village girls meeting gypsy women on the road’. Many similar examples can be found in Yuri Tynyanov’s book Pushkin and his Contemporaries. Though Tynyanov is being scientifically detached, we dare ask a question: where is the elegance and gallantry in that? How are Karamzin-style coinages different from Shishkov’s water-splashers, leisure walks and fighting game fields? Instead of florid word creations we can see no less ornate foreign borrowings. As to who was the greater innovator, considering the laws of the language, the question remains open.
Of course there is always a desire to straighten and smooth the situation in the popular culture. This leads to the school course of literature being silent on the fact that both Gavriil Derzhavin and Ivan Krylov supported Shishkov, and that Griboedov and Kuchelbecker belonged to young archaists.
There are a lot of archaic motifs in the works of Russian Avant-garde. And not only in literature. Khlebnikov and Guro explored folklore themes. Stravinsky, Scriabin and Kandinsky have pagan motives in their works. Filonov’s faces resemble those on old icons. These, and the poetry of Okhapkin, illustrate the fusion of archaism and Avant guard. This phenomenon is born because the relationship of tradition and innovation in art is extremely complex and cannot be expressed in black and white. Ancient themes may be perceived as avant-garde, whereas modernity may be trite and uninteresting. There are also cases where they complement each other, and one of them is Okhapkin’s poetry.
The fusion of archaism and Avant guard may herald the decline of postmodernist ethics. Though the process started back in the twentieth century, its development is going to be more noticeable in the near future.

On the avatar: Pavel Filonov «Formula of modern pedagogy», 1926. 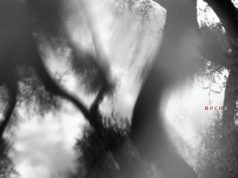 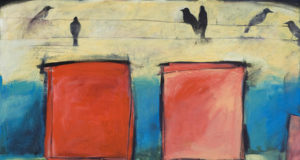